The slowdown in wages in the second quarter was driven mainly by wages in the private sector, which fell by 0.5% YoY, while wages in the public sphere slowed down only marginally from 4.9% in 1Q to 4.6% in 2Q 2020.

However, the fall in wages in the private sector was also driven by certain technical factors, as nursing allowances or quarantine wage compensation were not included in wages, although they increased household incomes.

As such, wages should return to single-digit growth in the second half of the year, reaching around 3% for the whole year. But there will be significant differences among sectors, as seen in the 2Q figures. For example, wages in accommodation and beverage service activities fell by 12% YoY. 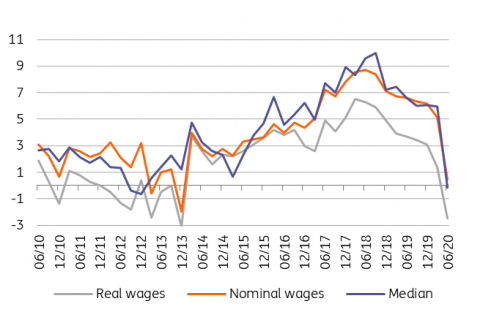 All in all, rapid annual wage growth experienced in previous years of between 6-8% seems to be over due to the Covid outbreak, and wages should grow around 3% this year and next. However, due to elevated inflation, real wages will most likely stagnate.