Czech retail sales, excluding cars in June surprised on the downside after more encouraging May figures (these were also revised downwards from -0.7% to -1.9 year-on-year).

As such, June retail sales stagnated in YoY terms, while analysts expect growth of around 3%. And after adjusting for working-day bias (+2 days YoY in June 2020), they even fell by 2%.

Non-food items sales grew by 4.7% YoY (versus 7.7% average growth in 2019), but when adjusted for working days, only increased by a modest 1.4 % YoY. Food sales continued to contract by around 3% YoY since April.

Car sales lowered its YoY contraction (-34% YoY in May and -45%  in April), but with the double-digit fall of around 12 % (-17% YoY working-day-adjusted), it was also disappointing. Mainly as new-cars registration in June improved to just 5% contraction. However, new figures from car registrations didn't confirm the improving trend, as new registrations fell again by 9% YoY in July. 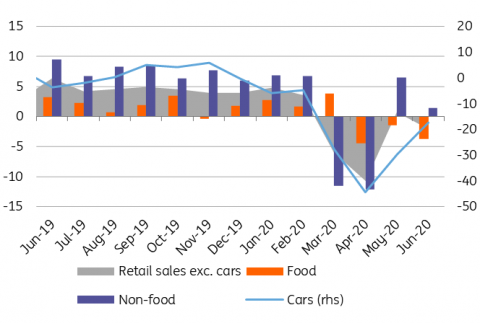 The Czech unemployment rate in July ended just slightly higher from 3.7 to 3.8% (vs. consensus of 3.9%) as the Czech labour market remains supported by government measures, which should continue till August. Still, the debate about the possible prolonging until the end of the year is ongoing. Ministry of Labour started to publish daily increments of unemployed people, showing a minor increase at the beginning of August to 3.9%.

We expect 4.6% at the end of the year, but the uncertainty of any estimates is high, depending on economic recovery and government measures in the quarters ahead. The current share of unemployed people at 3.8% is the highest since the beginning of 2018. Looking at summer-months figures, we saw 4.1% in summer 2017.

From this perspective, the impact of the Covid-19 crisis on the domestic labour market is relatively modest so far, but the worst is ahead and will come as government measures end, which partially compensates labour-costs to Covid-19 affected companies.