Czech wages surprise on the upside in the third quarter

While the market consensus expected wage growth of around 3.5% and the Czech National Bank called for 4.5%, today’s figure came in at 5.1% year-on-year after 0.6% growth in the previous quarter. In real terms, taking into account third quarter inflation of 3.3%, average wages increased by 1.7% YoY, after falling by 2.4% in the second quarter.

Strong growth both in public and private sector

Wage growth was faster in non-market sectors, accelerating from 4.6% to 7.7% YoY. The increase was relatively widespread, both in public administration and in educational and cultural activities. Wages in market sectors accelerated less, by 4.5% from a decline of 0.3% in the second quarter (after revision, initially -0.5). Growth was driven mainly by renewed wage growth in the manufacturing sector (2.4% after -3.9%) and wage growth in administrative activities and healthcare (almost 12% YoY), where extraordinary bonuses were paid. In administration, a statistical effect could have helped as the lowest-paid workers were laid off (-15% YoY lower employment), which increased avarage wages. This could also be seen in other segments, though it is difficult to quantify. 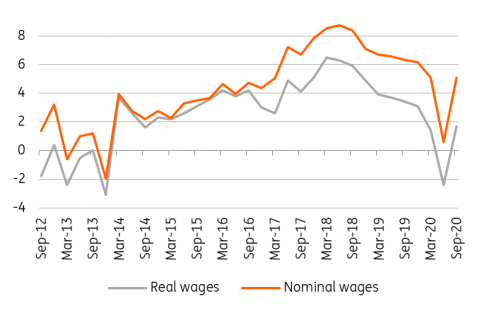 Real wages will stagnate this year

Despite the fact that wage growth was above expectations, the fourth quarter will be affected by the second wave of the pandemic and wage growth will likely slow. Even so, it should reach around 3% for the whole of this year, and we expect similar dynamics next year. That said, given this year's average inflation of around 3%, real wages will just stagnate this year and grow only slightly next year. Expected changes in income tax could significantly change net wage growth, allowing it to rise more than 5% next year but these changes are not yet known in the final form.