The EU's agreement on a Recovery and Resilience Fund (RFF) to fight the economic consequences of the Covid crisis can be seen as one of the most historic feats of the bloc in recent decades. It is not so much the size and imminent economic impact that is so consequential but rather the symbolism for European solidarity. However, the implementation of the fund has turned out to be more difficult than many market participants thought when it was first agreed in July. First of all, European finance ministers have still not agreed on the technical details of the fund and are running out of time to get everything done before the end of the year. Secondly, the decision to combine the multi-annual budget framework with the rule of law mechanism and the Recovery Fund is a complication that is causing delay.

The decision by Poland and Hungary to veto the package deal this week shows how difficult it is to get a final deal done. Yesterday, Slovenia backed their criticisms of the EU plan. The three countries are trying to block the currently negotiated rule of law mechanism, holding the entire package hostage and, with hindsight, illustrating that the decision to combine all three deals into one package may not have been the wisest one. At the current juncture, we refrain from taking a clear position on how these negotiations will end. It is a game of chicken as Poland and Hungary benefit significantly from the EU budget but they also know that other countries would benefit significantly from the Recovery Fund. Also, by blocking the package deal, net contributors will not get their recently negotiated “rebate” on contributions to the budget. While normally these deadlocks often end with a last minute compromise, it is also possible that the package will be opened and that the Recovery Fund will be taken out, and that a smaller group of eurozone countries (the so-called enhanced cooperation option) will try to find alternative solutions.

A boost to the economic recovery is at stake

Leaving politics aside, let’s focus on what the economic impact on the eurozone would be in the event that the Recovery Fund does not see the light of day in January (or at all). The funds from the Recovery Fund were never meant to be paid out before the summer of 2021, as the main goal was not about short-term stabilisation of the economy but rather longer-term investment to increase structural growth rates. Still, a long delay would put sizable grants at stake, as countries like Italy and Spain stand to gain a maximum of 2.5% and 3.5% of GDP over the course of 2021 and 2022, with the 2023 disbursement being decided at a later stage. Poland, Hungary and Slovenia are also supposed to see sizable grants come their way, on the order of 3.5%, 3% and 2.5% of GDP, over the coming two years.

A substantial boost to the Covid crisis recovery is at stake 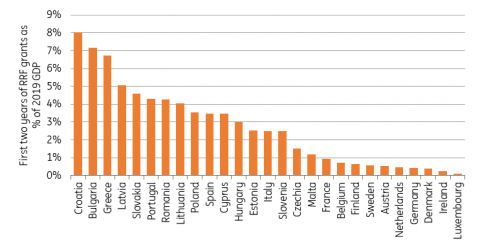 For a country like Spain, the absence of EU recovery funds would shave off more than half from our current growth projections for ’21 and ‘22, which is a very conservative estimate as we don’t take multipliers into account. Greek growth depends to a large extent on RRF contributions for the coming years as it stands to gain more than 3% per year. For Italy, the impact would of course be smaller, but still substantial. As structural funds would also not automatically continue without a deal on the new multi-annual budget, countries with regions that obtain substantial sums from that would also lose out. This involves mainly central and eastern European member states, but Greece and Portugal also receive substantial economic support from the funds.

This means that the downward risk of no agreement on a budget plays into the economic outlook for the coming year. While in the summer, the decision on the Recovery Fund almost looked like it was coming too late, the second wave of Covid  has made the grants a very welcome tool to help kickstart the recovery in 2021. Also, and maybe even more important, don’t underestimate the impact that the announcement of the Recovery Fund has had on financial markets. The eurozone received strong tailwinds, with the euro experiencing a rally over the summer and government bonds spreads narrowing. The message that the EU leaves no country behind in the Covid crisis is very important from a signalling perspective, which would be lost if no eleventh-hour solution is found.