The volume of exports reached a record level in 2017, supported by a strong automotive segment whose share of the total Czech export market reached 29% last year.

The latest foreign trade statistics confirm record-high export activity in 2017. Although the foreign surplus itself slightly declined compared with 2016, this was attributed to higher commodity prices in 2017, mainly oil, increasing the trade deficit in the category last year. Total exports in nominal terms reached CZK 3,885bn, which represents an increase of 5.6%. This figure was mainly driven by stronger exports of motor vehicles, which increased by 7.8% in nominal terms and reached a new record volume of CZK 995 billion.

The share of exports of motor vehicles in total Czech exports reached 29% in 2017. This share has been gradually rising from 23% in 2014 and "only" 20% in 2011, increasing the sensitivity of the economy to the car segment (see the Table). The economy has benefited from this development as the car segment has been performing exceptionally well in recent years. This was driven not only by favourable foreign demand and central bank FX-interventions to weaken the currency but also by newly introduced models, which successfully attracted foreign attention. Skoda Auto, for example, increased production by 12% YoY in 2017, while production by the two other most important car producers stagnated or even slightly declined. 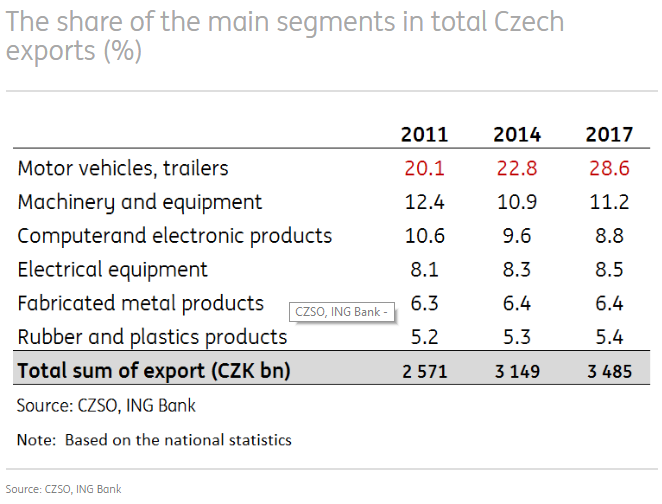 The strong car segment was also the main driver of Czech industrial production, which increased by 5.7% YoY in 2017. This represents the fastest growth rate in the last six years. Not surprisingly, the highest contribution to the YoY growth came from the automotive segment, which picked up by almost 9.5% and maintained its double-digit growth rate for the fourth year in a row. But 2017 was successful for other manufacturing segments, too, as their growth rates accelerated in 2017.

Deceleration in industry is expected

The fast-growing automotive sector brings some concern for the future, and signs of deceleration ahead are starting to appear.