Czech economic growth was stronger than expected in 4Q18, mainly due to stronger exports and helped by government consumption. On the other hand, household consumption disappointed, which brings some uncertainty to the outlook. We expect GDP growth to decelerate to close to 2.5% this year, after 3% growth in 2018.

Looking at the detail, the growth in GDP was most driven by investment activity maintaining double-digit growth in 4Q18. In particular, investment in ICT machinery and equipment accelerated (by 13.4% YoY), as companies try to deal with an overheated labour market and workforce scarcity. While infrastructure investment growth slowed slightly, it continued to register double-digit dynamics (12.8% YoY), as did investment in dwellings (11% YoY). Investment in transport equipment decelerated, likely driven by 2H18 emission troubles in the auto segment.

The second most significant growth factor was household consumption. Surprisingly, this slowed to just 2.2% YoY, having grown by over 3% in previous quarters. The slowdown in household consumption was apparent not only in durable goods consumption (possibly also affected by one-offs in the car segment last year), but in all types of goods consumption. Interestingly, wage dynamics slowed from 9.5% YoY in 3Q18 to 7.6%, likely leading to weaker-than-expected average wage growth to be released next week.

Government consumption aside, the main reason behind the stronger then initially expected 4Q GDP growth was net exports. With total exports growing by 5% YoY, the total negative contribution of net exports to YoY growth was just 0.2ppt. Both ING and the CNB expected a more significant negative impact, -1.2ppt in the case of the CNB.

The structure of GDP growth in 4Q18 brought some mixed signals. While the  GDP details confirm solid investment growth, the better than expected print was mainly due to surprisingly strong exports which are likely to decelerate this year on weaker foreign demand. Also, household consumption ended below expectations, suggesting that households are becoming more concerned about the economic outlook. Although the stronger than expected GDP growth, coupled with higher inflation, has led the market to believe that the CNB will raise rates at its March meeting, the current GDP does not signal any imminent need to hike during the next monetary meeting. CNB Board members might prefer to wait for May to have a new forecast in hand, in our view. 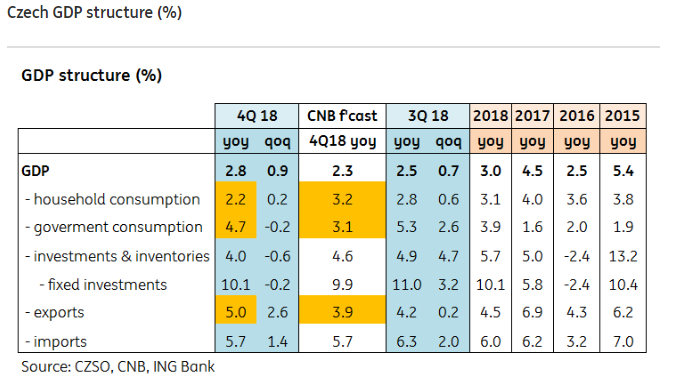