Growth in the Czech economy slowed to 2.5% in the third quarter, according to refined estimates. Household consumption is lower, but it's still the main growth driver. Fixed investments fell slightly. We expect the economy to grow around 2.5% this year, falling closer to 2% in 2020.

The Czech domestic economy grew by 2.5% year-on-year in Q3, and by 0.4% quarter-on-quarter. Compared with the first preliminary estimate, there was a slight upward revision for QoQ growth from 0.3% to 0.4%. But those figures for the third quarter slightly lag the original market expectation of 2.6% and the CNB estimate of 2.7% YoY.

GDP structure reveal that growth was driven mainly by household consumption similarly as in previous quarters. However, annual growth slowed further from 2.9% in 2Q to 2.3%. Compared to 3-4% growth in 2015-2018, household consumption started to slow down and 3Q growth fell also below the CNB's expectation of 2.9%.

Investment, which saw a surprise and noticeable decline last quarter, remained subdued in Q3. In fact, it's falling slightly year-on-year, driven mainly by a 2.6% YoY decline in ICT and machinery investment. However, real estate investment accelerated to 7% YoY. Government consumption saw solid growth of 3.3% in the third quarter, which is above our and the CNB's expectations. 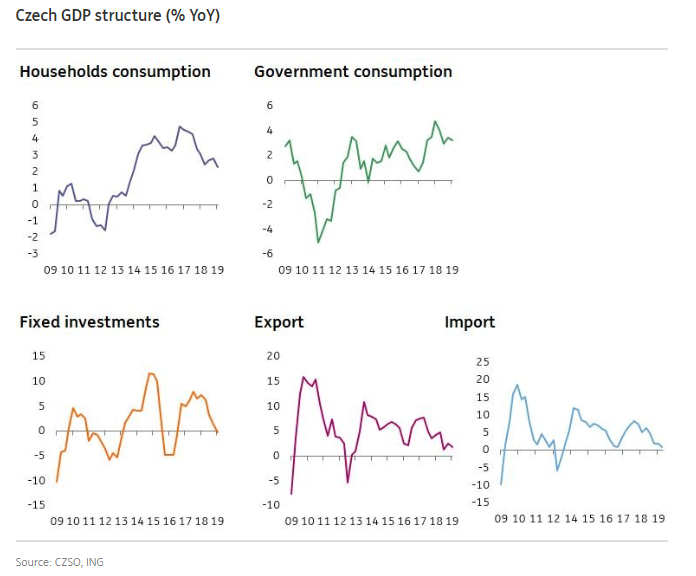 Net exports contribute to growth due to import slowdown

Due to a slowdown in investments, which are very import-intensive, we also see an import slowdown (1% YoY in 3Q vs. 2% in the previous two quarters), which in turn increases the contribution of net exports to GDP. The same effect was observed in the last quarter, when net exports contributed 0.7 percentage to YoY growth as in 3Q. However, export growth is also gradually weakening, reflecting weaker external demand.

The 3Q GDP structure confirms the Czech economic slowdown. Investments started to fall in YoY terms, household consumption is gradually weakening, exports too. On the other hand, some of the weaker figures might look like that just “on paper” because the numbers for 3Q were adjusted for the higher number of working days in this quarter (3Q19 had 3 more working days than 3Q18). Non-adjusted GDP growth rose by 3.4% YoY in 3Q. Similarly, household consumption accelerated to 3% YoY in 3Q when you don't look at the adjusted figures. Given the fact that it is not always possible to filter out the effects of working days, you also need to consider the more positive-looking dynamics of non-working day adjusted GDP growth.

Slowdown ahead due to foreign development

For the whole year, Czech economic growth should be around 2.5% after 3% in 2018. Although foreign risks seems to have moderated in recent weeks, they're still elevated. The positive news is that the German economy avoided a technical recession in the third quarter, with a modest QoQ growth of 0.1%, while the market expected a slightly negative figure. But the development abroad remains fragile and it will be crucial for the growth of the domestic economy next year. Right now, we expect the domestic economy to slow further to 2% next year.