Shortages to send eurozone goods prices higher, but probably not for long

Supply chain problems and the surprisingly quick recovery of demand for goods after the first lockdown have caused shortages for all sorts of inputs. A perfect storm has hit the market for lumber, plastics and semiconductors, which is unfortunate but also illustrative of how tight markets are anyway. With demand returning quickly and supply having been scaled down in the aftermath of the first wave, isolated events can have significant ripple effects. Think of the Texas freeze which impacted plastic production, the fire at a large computer chip production facility in Japan and the beetle infestation which has devastated Canadian forests. Despite all of the supply-side pressures, this has not yet resulted in surging goods inflation. However, in May, goods inflation increased from 0.4% to 0.7% and we expect this to be the start of higher trending goods inflation, as businesses grappling with shortages have indicated they will pass higher costs onto the consumer.

Shortages have popped up in several sectors, causing hiccups in industrial production

Across eurozone industry, multiple sectors are now reporting significant shortages in equipment. The European Commission’s Economic Sentiment Indicator provides quarterly information on which factors are limiting production and ‘equipment’ has spiked as a factor in 2Q 2021. In fact, for total eurozone industry, it is now at its highest level since the start of the indicator in 1985, with 22.8% of businesses reporting equipment shortages as a key factor limiting production.

Shortages are rising across sectors, but the sectors affected most by this are logical given the pressing problems in computer chips, plastics and lumber. Rubber and plastics producers top the list, with electrical equipment producers a close second. Automotive, wood and computer and electronics producers round out the top five, showing a clear link to the problems in finding chips, plastics and lumber at the moment.

The impact on production has varied for now, with the main problems accumulating in the auto sector so far due to semiconductor shortages. This has brought production down -14.3% from its November peak. Other sectors are seeing less impact in terms of outright production declines. Furniture production is also down 6% from its recent peak, while smaller declines are reported among computer and electronics producers.

Shortages have become a key issue in several industrial sectors 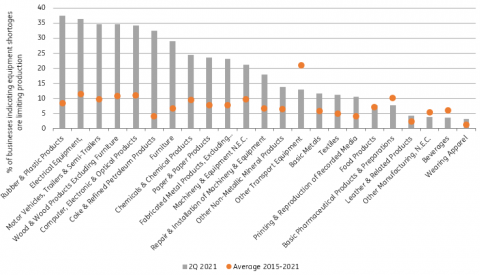 The impact on producer prices has started to show. In April, producer prices increased by 7.6% year-on-year, the strongest increase since 2008, much of which is because of energy price base effects. For some of the sectors most affected by shortages, the lack of availability of inputs has not yet translated into excessive increases in producer prices up till now. This could be because the data lags a bit; producer prices for May have not yet been reported. It could also be because the shortages represent a small amount of total inputs in the production process, think of computer chips in car production. In wood production, we’re starting to see elevated producer prices at 6.3% YoY in April, but the spike in lumber prices continued in May so this is not yet the peak. The sectors for which we have seen large increases in producer prices have been base metals and the manufacture of coke and refined petroleum products, at 18.3 and 53.1% YoY. So for many of the sectors experiencing shortages, margins have not yet come under huge pressure, which has limited the pressure to raise prices so far.

Even though producer prices have had differing responses to shortages, businesses do seem ready to start increasing prices. Selling price expectations among businesses have shot up dramatically in recent months, which has been led by sectors depending on lumber as its main input, but also the oil and chemicals sector, rubber and plastics and basic metals sector have seen a rapid rise in expected selling prices. While other sectors have seen a more muted response, almost all goods-producing sectors currently face a much higher percentage of businesses expecting to increase prices than was the case on average in the 2016-2019 period. This shows that businesses do intend to increase prices on the back of the disruptions facing the supply chain.

Selling price expectations are the highest for industries experiencing shortages 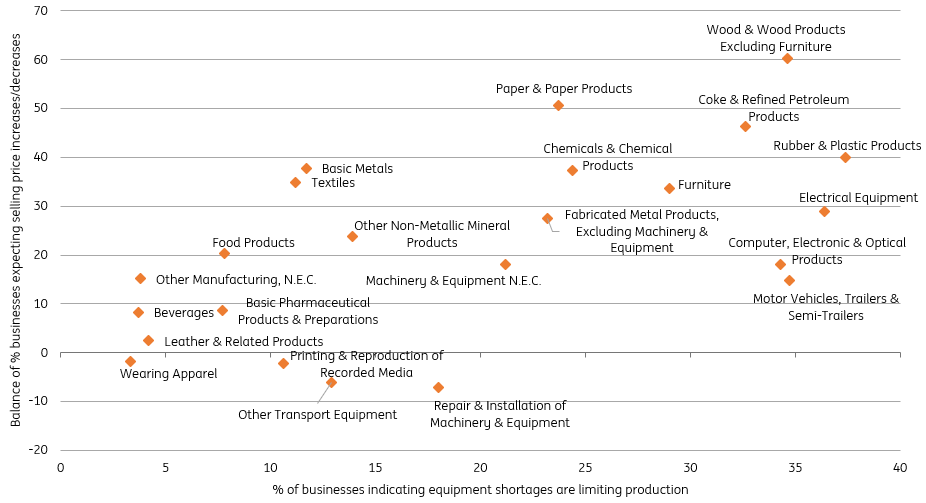