Total state budget revenues have increased by 7.7% year-to-date, while total spending has been accelerating, adding 11.6% YoY in September.

Total revenues remain below expectations this year, not only for VAT (4.7% vs. 6.8% YoY), which was influenced at the beginning of the year by some technical factors. Employment income tax revenues and social security are also gradually lagging behind expectations despite the wage growth slowdown being much weaker than expected in 1H19 (Employment tax revenues: 12.5% YoY vs 14.4% expected). On the other hand, corporate taxes began to generate higher revenues, growing 9% YTD YoY vs. 5.9% expected. Still, total tax revenues are lagging and will probably end below the budget this year. 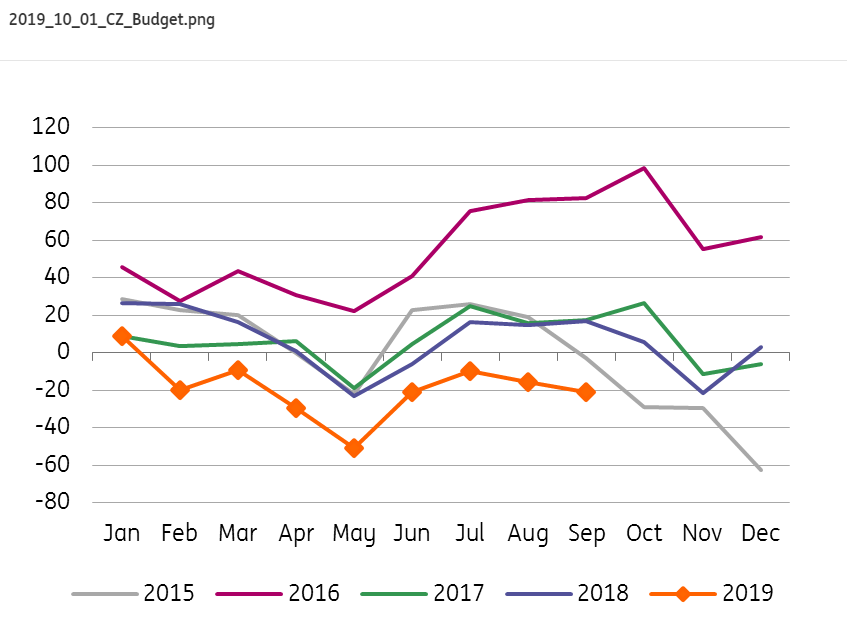 Expenditures growing by a double-digit pace

On the other hand, expenditures are growing faster than expected, but according to the Ministry of Finance, this is due to some expenditures that have already been paid prematurely and will not grow as much for the rest of the year, for example, payments to non-profit organizations. As expected, the main reason behind the strong expenditures growth is pensions (+8.7% YoY YTD), wages (+7.6% YoY YTD) and investments (+40% YoY YTD).

Planned deficit of CZK40bn likely to be met

Despite slightly weaker income and some higher expenditures, the state budget may not end in a worse-than-expected deficit of CZK40bn due to weaker-than-planned investment expenditures. These have been very volatile in recent years as a result of the EU funds tapping. Investments expenditure plan is currently met by 64%, while it would correspond to 75% for September. Although investment activity usually accelerates at the end of the year, it might end slightly behind the plan and keep the total deficit close to the expected figure.

Total government budget in minor surplus due to cities/regions budget

However, despite the state budget deficit, the overall result of the public sector could end this year with a slightly positive result (0.3% GDP) vs. 0.9% in 2018 thanks to the performance of regions, towns and municipalities, as in previous years.