Czech National Bank Board member Tomas Holub mentioned all possible tools for delivering monetary easing at a meeting with analysts yesterday. According to Holub, the CNB Board debated possible options should the zero-lower bound be hit. The board has yet to reach consensus and that's why they don't want to be more specific for now. But all possible options are on the table, including the 2013-2017 FX-floor regime style (which proved to work well, according to Holub), QE, the yield-curve control or some funding for lending scheme. Even negative rates were mentioned, though this is not the preferred option.

Holub’s comments were interpreted by the market as very dovish (sharp fall in CZK and front-end CZK rates). However, current board members will try to avoid any controversial policy reaction as long as possible, in our view. As such, we expect the CNB to deliver less controversial steps soon such as some form of funding for lending schemes, a further decrease in countercyclical capital buffers and other forms of macroprudential easing before more “strong” measures such as an FX-floor are considered.

How likely is the CNB FX floor?

It is not our base (nor for the CNB); it is just one logical option the CNB is considering should it hit the zero-lower bound (which still hasn’t been reached). Note that with the 75bp cut last week the CNB over-delivered vs its own staff forecast and indicated a pause for easing measures for now (see CNB Review). This is also consistent with a low urgency for the FX floor for now.

In our view, the situation would have to deteriorate materially for the CNB to embark on the FX floor as such a measure was highly unpopular and controversial between 2013-2017 within the country.

How bad things would things have to get for CNB to embark on FX intervention?

As Holub put it in a Reuters interview in mid-April, potential unconventional tools would be in the pipeline only if the Czech economy enters a protracted recession with mounting deflationary pressures. Though a V-shaped recovery is becoming a less likely scenario as the severity of the Covid-19 outbreak looks set to damage economic growth for a longer time, deflation prospects are not yet clearly visible. Indeed, in the latest CNB forecast, the bank pencils in an 8% GDP fall in 2020, but inflation is expected to remain at 2.8% this year and 2.1% next year, with core inflation around 2% in both years. This is not a scenario which would warrant extraordinary measures such as an FX floor, in our view.

Has the CNB exhausted conventional measures?

Not yet. Should there be a need for additional easing, the CNB may still deliver one last rate cut and can also decrease the countercyclical capital buffer (this could happen next week). However, the CNB might try to deliver other forms of macroprudential easing such as specific funding for lending programmes with longer-term maturities. The CNB already plans to set this scheme for non-banking institutions, which might obtain the CNB liquidity support using collateral used in the traditional CNB repo-operations. In the case of banks, they are about to obtain 3-month liquidity support, and the CNB might further fine-tune these operations, enlarging maturity/scope or make conditions more encouraging for domestic banks.

Which main non-standard measures will likely be preferred?

Out of the three key non-standard measures (negative rates, QE and FX floor) we see the FX floor as the most likely. However, before approaching that, all other “non-controversial” alternatives (such as funding for lending schemes) need to be exhausted, in our view.

A possible FX-floor regime is imaginable only in a very negative adverse scenario. But under these circumstances, CZK would likely be weakening by market forces and we think it should reduce the need for managed FX depreciation. As such, the FX-floor regime (if needed) might be just about defending the level of CZK in the time (the level that is already weak), rather than weakening CZK materially as was the case in November 2013, as at the time the koruna was overvalued, as you can see in the chart below.

Negative rates are not a preferred option and the ECB and Riksbank experiences show their benefits are questionable. As for QE, the CNB indicated it would only have a financial stability focus, but with CZGB stable (and in fact in strong demand) there is a little need to embark on this kind of easing. Also, the yield-curve control does not bring many benefits at this point, as the CZGB curve does not stand out in terms of steepness.

Will balance sheet expansion be an issue?

Undoubtedly the CNB is likely to take this into account, but the monetary policy considerations are likely to take precedence and should reduce concerns about possible losses on the balance sheet. We should note that at this point that all the FX intervention operations from the period of 2013-2017 are in profit as EUR/CZK is above 27.00. Also, remember that QE would have a balance sheet expansion implication too, but in terms of the real economy the impact would be less direct/favourable vs the FX floor given the persistent over-liquidity in the system and the large openness of the Czech economy (meaning it would benefit from weaker FX).

Figure 1: CZK is currently undervalued vs EUR compared to 2013 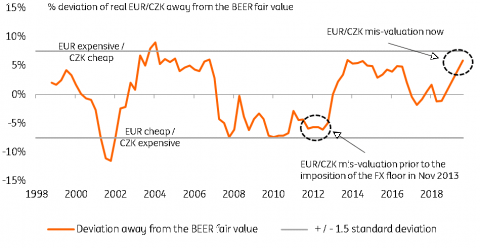 Impact on CZK: Overreaction as the FX floor is not imminent

We see the koruna's decline as an exaggeration to the headline news. With the road towards possible FX interventions being a long one and some of the standard easing measures not exhausted yet, we don’t see the FX floor as imminent and likely at this point. Hence, we expect the koruna to recover once the initial short-term fears of the FX floor recede and EUR/CZK heads back to towards the 27.00 level in coming weeks.

Also, as discussed above, it is not set in stone that the possible imposition of the FX floor would follow the 2013 blueprint (ie, to weaken the currency materially, by say around 5%) as CZK is meaningfully weaker today and has already undergone a large fall in the past few months (being the worst performing CEE currency year-to-date). Indeed, CZK is currently cheap vs EUR based on our medium-term BEER model, compared to the situation in 2013 when the koruna was overvalued prior to the start of CNB FX interventions (Figure 1).