Despite the overall mixed picture and continued stalling of progress at the global level, the situation is more nuanced at the regional and country level, the World Economic Forum (WEF) 2017 gendner gap report shows. Out of the 142 countries covered by the Index both this year and last year, 82 countries have increased their overall gender gap score compared to last year, while 60 have seen it decrease, including the Czech Republic (77th place in 2016).

By contrast, last year’s Report had found negative outcomes in more than half of countries surveyed. While a number of countries and regions have crossed symbolic milestones on the path to gender parity for the first time this year, a number of major economies and high-population countries have experienced reversals on their past progress this year, WEF says. 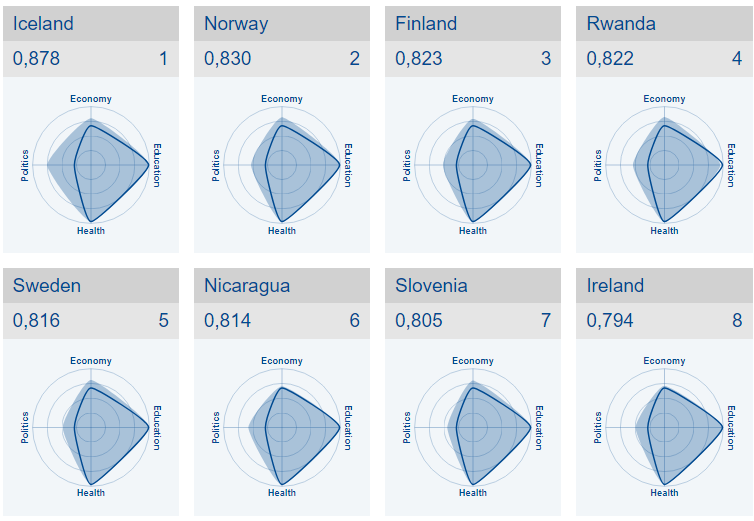 The Czech Republic ranked 88th in the overall ranking and placed:

The gender gap is remarkable especially in the areas of labour force participation, R&D personnel, legislators, senior officials, managers, ministers, members of parliament, estimated income - despite the fact that the rate of tertiary education enrolment is higher in females than in males. View country data and infographics. (Look also at the 2016 results)

The Slovak Republic (74) and Montenegro (77) both record notable improvements in their gender parity performance this year—the former with regard to ministerial roles, the latter with regard to parliamentarians—while the Czech Republic (88) slips several ranks. The Kyrgyz Republic (85) ranks ahead of Tajikistan (95). They are joined in the bottom ranks of the regional table by other Caucasus states—Georgia (94), Armenia (97) and Azerbaijan (98)—which remain among the worst-performing countries globally on the Health and Survival subindex, recording some of the lowest female-to-male sex ratios at birth in the world, just above China’s. Hungary (103) takes the bottom spot in the region. Despite improvements regarding women’s share of estimated earned income, it continues to be the region’s, and one of the world’s, lowest-performing countries with regard to closing the Political Empowerment gender gap.