Home > Good governance > Legal Reform and Transparency > TI: The Czech Republic improves scores in CPI for 2017, but the European average is still far ahead, the country faces risks

TI: The Czech Republic improves scores in CPI for 2017, but the European average is still far ahead, the country faces risks

The International Secretariat of Transparency International (TI) released the Corruption Perceptions Index for 2017 (CPI). The Czech Republic gained a total of 57 points out of 100 and climbed from the 47th place in 2016 to the 42nd place in 2017, a shared position with Spain, Cyprus and Dominica. The average of the European Union (65 points) is still far ahead. The result, rather than showing the onset of a positive trend, reflects the frozen level of corruption perceptions. For real improvement, a few unpopular but simple steps have to be taken, TI says. 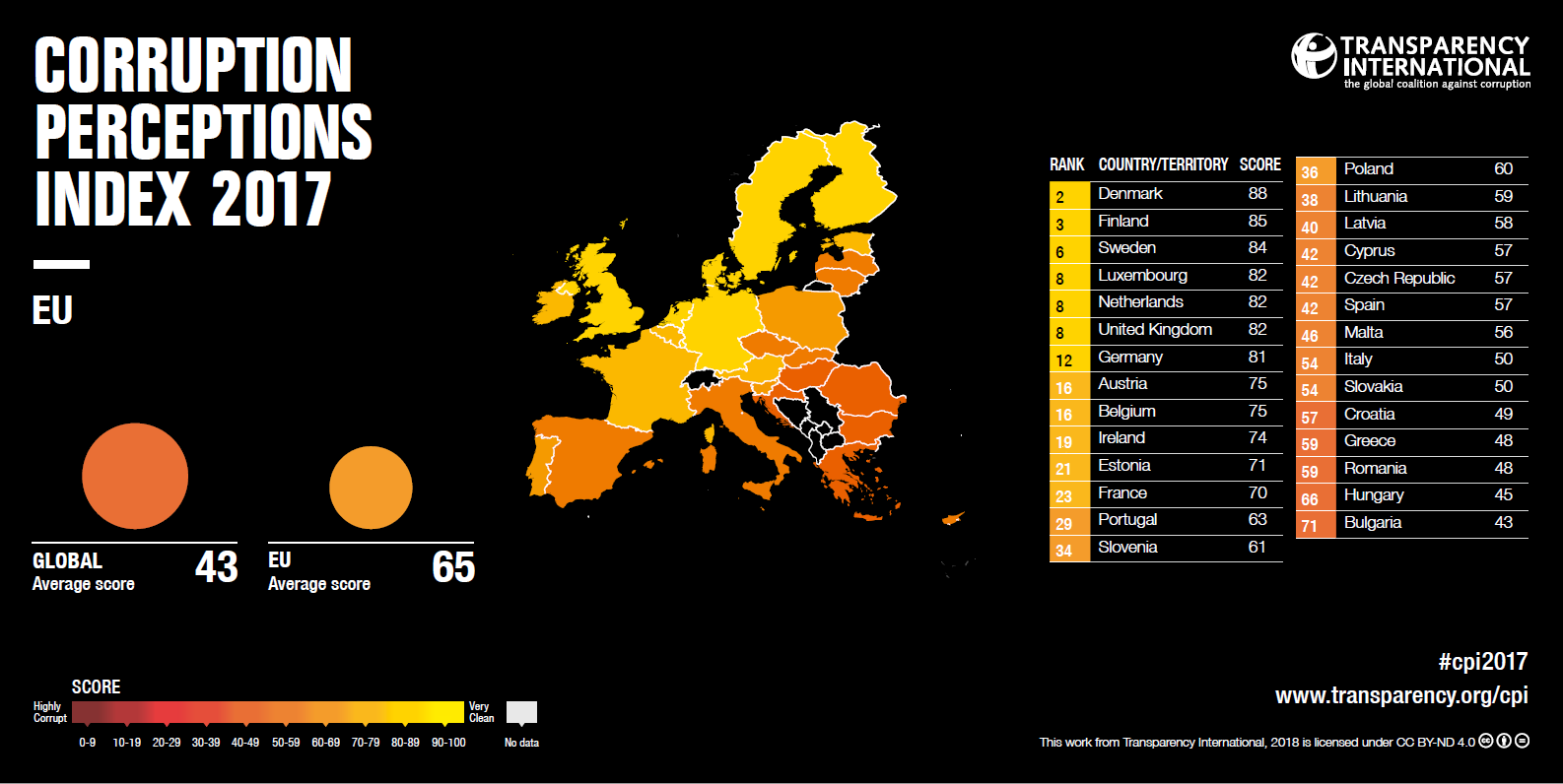 Compared with the member countries of the European Union the Czech Republic has moved up one place, to a shared 18th position . The Baltic states are in the middle of the ranking (11th, 16th and 17th place). The other countries of Visegrad – Slovakia, Poland and Hungary – had better scores in 2016 than in 2017. The reason behind the improved scores for the Czech Republic is the implementation of legislation in 2017 that has improved the country’s position in the Sustainable Government category. The legislation is related to conflict of interest, political party financing, registry of beneficiary owners, or regulation of gambling.

'Today, we need to take into account the wider foreign context and impact of the importance of the CPI in the business sphere, as it determines how the riskiness of the Czech Republic is assessed by foreign business partners. The countries of Western Europe or the United States are still ahead of us in a number of measures, particularly in punishing of the corrupt practices. CPI index value may have a negative impact on domestic firms trying to enter foreign markets because they could be assessed more rigorously in terms of risk. Therefore, domestic firms should pay attention to the introduction and enforcement of anti-corruption measures. From our practice of setting up these measures in companies, we see that there is still room for improvement,' says Steve Villalobos, Senior Manager of Investigation Services and Dispute Resolution, EY Czech Republic.

The Czech Republic is experiencing a schizophrenic period. The CPI result for 2017 reflects, on the one hand, the fact that some of the legislative measures already adopted have been reflected in the sub-areas monitored, but at the same time it does not detect problems in their implementation. Last year's surplus state budget played also a somewhat positive role, but it is related to the general trend of the rising economy in most European countries.

Thus, the current ranking of the Czech Republic can be interpreted as a consequence of stagnation in some monitored areas rather than as the onset of a new positive trend. Otherwise, the result would be better. Whether it is the interconnection of political and economic power, the absence of some legislative measures or their application contrary to the principles of transparency - these negative trends are strengthening. So far there are only warning signals that may not be immediately visible, but they can contribute to a long-term decline, as in the case of Hungary, TI Czech Republic says, adding that privatization of public interest (so-called state capture) is still taking place in the Czech Republic without significant efforts to limit it.

'...The stagnation in the last two years also shows that a mere change of legislation is not enough. The current government plans to complete legislation on lobbying and whistleblower protection. That is a step in the right direction, but we must not forget the vigorous enforcement of the already adopted legislation. The personal involvement of individual members of the government is irreplaceable in this sense. Emphasis should also be placed on compliance systems of state-owned companies and key public suppliers.

Finally, we ask ourselves what conclusions we can draw from this year's CPI results. This country has recently adopted an adjustment to the funding of electoral campaigns, amended the law on conflict of interest, passed a law on proof of the origin of property, and earlier amended the law on criminal liability of legal persons. The public prosecutor's office is far more active in the prosecution of corruption cases. Therefore, if the government is determined to continue to implement and, above all, to enforce anti-corruption legislation, it can be expected that the CPI Index results will be positive in the coming years', EY's Steve Villalobos comments.

The Data Protection Authority warns of deficiencies in cookies bars