America’s combined asset base in Poland, Hungary, and the Czech Republic (roughly $140 billion) was larger than its asset base in India ($121 billion). In 2014 the UK, France and Germany accounted for 48% of U.S. affiliate manufacturing employment in Europe. In 1990 they accounted for 67%. Meanwhile, the combined share of U.S. affiliate manufacturing employment in Poland, the Czech Republic and Hungary jumped from virtually zero in 1990 to nearly 11% in 2014, indicative of the eastern spread of U.S. European operations. 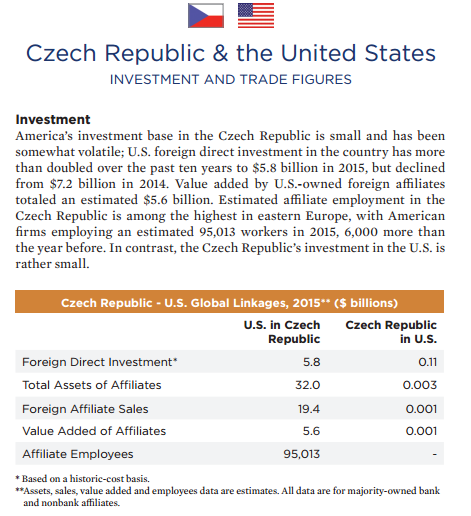 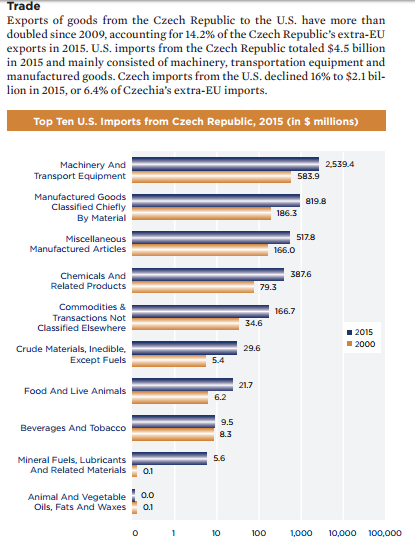 Compare with the 2016 report. U.S. foreign direct investment in the Czech Republic totaled $7.2 billion in 2014. Value added by U.S.-owned foreign affiliates totaled an estimated $5.7 billion. Estimated affiliate employment in the Czech Republic is among the highest in eastern Europe, with American firms employing an estimated 86,904 workers in 2014, double the number of employees in 2000.

Back to the 2017 report, generally, the transatlantic economy generates $5.5 trillion in total commercial sales a year and employs up to 15 million workers in mutually “onshored” jobs on both sides of the Atlantic. Together the U.S. and Europe accounted for only 27% of global exports and 31% of global imports in 2015. But together they accounted for 66% of the outward stock and 57% of the inward stock of global FDI. Moreover, each partner has built up the great majority of that stock in the other economy. Mutual investment in the North Atlantic space is very large, dwarfs trade, and has become essential to U.S. and European jobs and prosperity.

The UK and EU are critical economic partners for the United States. In 2015 the U.S. exported $123.5 billion in goods
and services to the UK, and imported $111.5 billion worth of British goods and services. The U.S. is Britain’s largest
export destination after the EU. U.S.-UK trade is significant. But the real driver of the British-American economy is investment. In 2015, U.S. foreign direct investment in the UK totaled a record $593.0 billion and UK foreign direct investment in the U.S. totaled $483.8 billion. Estimated sales of American affiliates in the UK and British affiliates in the U.S. totaled more than $1.3 trillion. The UK accounted for 22% of overall global U.S. assets outside the United States. U.S. affiliates employ almost 1.4 million workers in the UK while UK affiliates employ roughly 1.1 million Americans. British firms were the #1 source of onshored jobs in 25 of the 50 U.S. states in 2014.