Home > Good governance > Social Responsibility > Quality of Life Index 2019: Říčany in the lead again, Přelouč jumped up the most

Quality of Life Index 2019: Říčany in the lead again, Přelouč jumped up the most

The Quality of Life Index compares publicly available data of all 206 Czech municipalities with extended administrative powers. It comprises a total of 29 variables expressing the standard of health, the environment and the availability of health care, optimal material conditions (work, housing, education), sufficiency of services and relations within the community (for example in the form of the existence of local associations etc.). Analysts work with big data collected from the internet and the public sector. They do not evaluate the municipalities subjectively, they merely compare the availability in each of them based on the principles of UN and OECD methodologies validated by Deloitte.

“Given the growing prices of real estate in the Czech Republic, we want to help people make informed decisions when selecting a place to live. I consider the optimal ratio of costs of living and quality of life the most important. We also aim to provide the mayors with data to support their future decisions,” says Pavel Šiška, Managing Partner of Consulting, Deloitte.

“Municipalities from structurally affected regions have the lowest rating, i.e. from the Moravian-Silesian, Ústí nad Labem and Karlovy Vary Regions. Most municipalities in these regions have a large percentage of inhabitants with financial problems and a high unemployment rate compared to the rest of the Czech Republic. In the Ústí nad Labem and Moravian-Silesian Regions, there is also a comparatively high level of air pollution,” says Jan Havránek, statutory executive of Obce v datech, commenting on the results.

The first and second places and the last two remain unchanged compared to 2018. The best improvement was recorded in Přelouč, which moved up by 88 places. This was due to an improvement of conditions in the area of migration of young people, gambling and average life expectancy. On a regional level, municipalities in the Zlín and South Moravian Regions saw the most significant improvements.

The most significant slump was recorded by Železný Brod, especially with respect to the indicators of gambling, migrating young people, paediatricians and unemployment. On the regional level, municipalities in the Karlovy Vary Region show the larges decrease.

More details about the project of Obce v datech and Deloitte including a link to this year’s and last year’s results are available here. 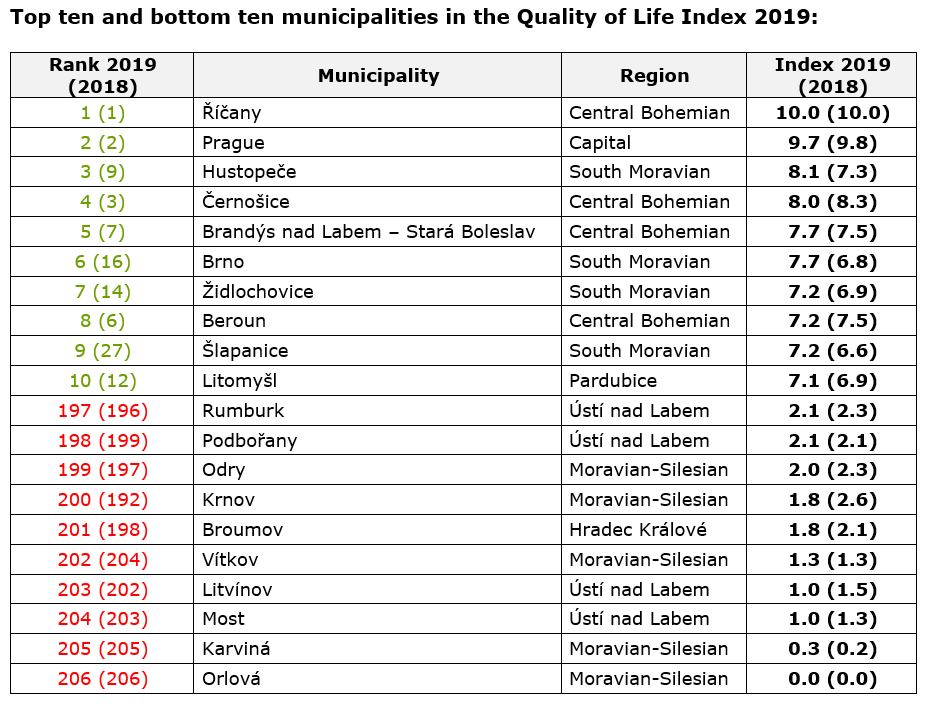 Avast's response to the war in Ukraine

AURES Holdings donated CZK 3,000,000 to help Ukraine and sent it to People in Need charity

UNYP and the Czech Olympic Team activate their partnership